Get in touch
chatbot.com

History of the Turkish Angora

The Turkish Angora descended from the African wildcat and are one of the ancient breeds of cat. The Turkish Angora originated from central Turkey, in the Ankara region. In 1520, a longhair, white cat went to Europe from Ankara, gaining admirers from Persia. Yet, they almost became extinct in Europe, only surviving as they were in a Turkish zoo.

The Turkish Angora is a small to medium-sized cat, with a silky semi-long, shimmery white coats. They can also come in various other colours such as tabby and black with an undercoat of chocolate brown. The original Turkish Angoras were white with ‘odd eyes’, one being orange and the other blue. Their eyes may also be blue, green, amber, yellow, with large wide-set pointy ears.

Turkish Angora cats are loyal, affectionate, and loves to play. They form strong bonds with humans and usually gravitate to one family member. Due to this they become very protective of that person. Their intelligence is remarkable, showing basic problem solving skills. They can be trained, including deaf Turkish Angoras, due to their intelligence and their desire to interact.

The Turkish Angora is generally a healthy breed of cat with no specific problems. It’s common for white cats to be prone to deafness. Yet deafness should not be a problem if the cat is an indoors cat. It’s thought that the frequency of deafness has reduced due to developing the breed. Due to the lack of skin pigmentation in the white Angora, there may be an increased risk of sunburn. This is along with a higher risk of skin cancer if they spend much time in direct sunlight. 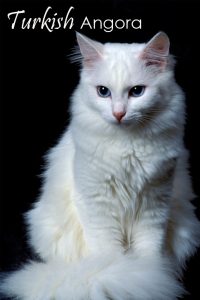 Need to get cat insurance for your affectionate Angora? Avoid costly vet bills if your cat encounters any health issues and compare our pet insurance to find the best policy for your pet. Why not get a quote for our Lifelong Cat Insurance for your Turkish Angora.

Why do you need pet insurance for your cat or dog?

Did You Know, Your Pet Can Be A Blood Donor?

Pets, cats and dogs and the Hazards of Flowers

We use cookies on our website to give you the most relevant experience by remembering your preferences and repeat visits. By clicking “Accept All”, you consent to the use of ALL the cookies. However, you may visit "Cookie Settings" to provide a controlled consent.
Cookie SettingsAccept All
Manage consent

This website uses cookies to improve your experience while you navigate through the website. Out of these, the cookies that are categorized as necessary are stored on your browser as they are essential for the working of basic functionalities of the website. We also use third-party cookies that help us analyze and understand how you use this website. These cookies will be stored in your browser only with your consent. You also have the option to opt-out of these cookies. But opting out of some of these cookies may affect your browsing experience.
Necessary Always Enabled
Necessary cookies are absolutely essential for the website to function properly. These cookies ensure basic functionalities and security features of the website, anonymously.
Functional
Functional cookies help to perform certain functionalities like sharing the content of the website on social media platforms, collect feedbacks, and other third-party features.
Performance
Performance cookies are used to understand and analyze the key performance indexes of the website which helps in delivering a better user experience for the visitors.
Analytics
Analytical cookies are used to understand how visitors interact with the website. These cookies help provide information on metrics the number of visitors, bounce rate, traffic source, etc.
Advertisement
Advertisement cookies are used to provide visitors with relevant ads and marketing campaigns. These cookies track visitors across websites and collect information to provide customized ads.
Others
Other uncategorized cookies are those that are being analyzed and have not been classified into a category as yet.
SAVE & ACCEPT