Get in touch
chatbot.com

What is a Husky dog?

The Husky dog is a working dog breed that originated in north-eastern Siberia, Russia. The breed belongs to the Spitz genetic family. It is recognizable by its thick furred double coat, pointy ears, curled tail and distinctive markings.

Is a Husky dog and a Malamute the same?

Although often mistaken, the Alaskan malamute and the Siberian Husky are separate breeds. Both bred as sled dogs in harsh northern climates. but the malamute generally pulled heavier loads and is larger in size.

Are Huskies easy to train?

A beautiful breed of dog, Huskies are independent, athletic, and intelligent. But because they are pack dogs, they are not easily trained. Huskies will challenge your leadership and test boundaries.

Why do Huskies curl their tails?

When working or relaxed their tails are down. Excitement causes their tails to curl up and you’ll know when a husky is tired as he’ll drag his tail. When a dog wags his tail, it’s a doggy smile, but he may do this when he’s nervous too.

Why does a Husky dog have blue eyes?

The blue eye colour depends on the genetics of the parents. Some breeders strive to produce only blue-eyed dogs. Huskies can also have brown, green and amber eyes and bi eye colours.

Do Husky dogs shed a lot?

A huskies coat has two layers, an undercoat and a topcoat. When Huskies shed, this is known as ‘blowing their undercoat’ and generally happens twice-a-year. This will happen in Spring and Autumn. Although some Huskies will only shed once a year, depending on the climate that they live.

Huskies are an affectionate and good natured breed of dog. This makes them a good family dog, getting along with children and other pets. 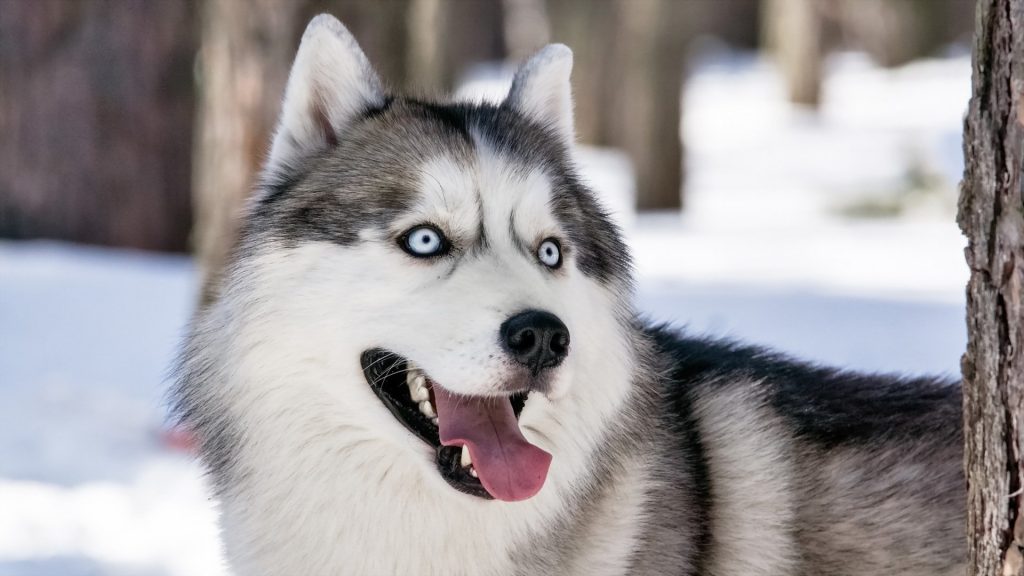 Animals like Huskies, parrots and cats can mimic sounds which they hear around them, so due to their vocal cords and keen observation they sometimes appear to ‘speak’.

Why do Huskies howl?

Generally dogs howl to attract attention, to make contact with others and to announce their presence. But some dogs also howl in response to high-pitched sounds, such as emergency vehicle sirens or musical instruments. No one knows the huskies reason for their howl,  but are likely to howl amidst the company of other dogs.

Huskies need regular grooming, especially during shedding season, but not haircuts or shaving. You might think you’re doing your dog a favour by cutting or shaving his hair in the warmer months. But their double coat actually protects them. Their coat protects them from UV rays and insects, plus keeps them warm in the Winter and cool in the Summer.

What is a double coat on a dog?

A dog’s coat may be a double coat, made up of a soft undercoat and a tougher topcoat. A top coat, has stiff hairs to help repel water and shield from dirt, and an undercoat to serve as insulation. A single coat, lacks an undercoat.

Do Huskies need to be in the cold?

Huskies are resilient, and they can withstand very cold temperatures. Sled dogs often living outdoors in barns or insulated dog houses. But the domestic Husky should be allowed to spend equal amounts of time indoors and outdoors.

Do Huskies smell and should they be bathed?

Huskies do not have a very oily coat, meaning that do not have any of the usual doggy odour. You should not bathe your Husky too often because it will dry out their fur and their skin.

What does a Husky dog eat?

Huskies can have both dry and wet food, though many owners find that the dog thrives on rawer foods such as chicken, beef, lamb, fish, fruits and vegetables.

In the unfortunate event that your Husky dog falls ill or has an accident, our Pet Protect dog insurance gives you peace of mind knowing that they can be treated with the care they deserve and you don’t having to worry about how to pay for expensive vet bills. Compare pet insurance and get your quote today.

Why do you need pet insurance for your cat or dog?

Did You Know, Your Pet Can Be A Blood Donor?

Pets, cats and dogs and the Hazards of Flowers

We use cookies on our website to give you the most relevant experience by remembering your preferences and repeat visits. By clicking “Accept All”, you consent to the use of ALL the cookies. However, you may visit "Cookie Settings" to provide a controlled consent.
Cookie SettingsAccept All
Manage consent

This website uses cookies to improve your experience while you navigate through the website. Out of these, the cookies that are categorized as necessary are stored on your browser as they are essential for the working of basic functionalities of the website. We also use third-party cookies that help us analyze and understand how you use this website. These cookies will be stored in your browser only with your consent. You also have the option to opt-out of these cookies. But opting out of some of these cookies may affect your browsing experience.
Necessary Always Enabled
Necessary cookies are absolutely essential for the website to function properly. These cookies ensure basic functionalities and security features of the website, anonymously.
Functional
Functional cookies help to perform certain functionalities like sharing the content of the website on social media platforms, collect feedbacks, and other third-party features.
Performance
Performance cookies are used to understand and analyze the key performance indexes of the website which helps in delivering a better user experience for the visitors.
Analytics
Analytical cookies are used to understand how visitors interact with the website. These cookies help provide information on metrics the number of visitors, bounce rate, traffic source, etc.
Advertisement
Advertisement cookies are used to provide visitors with relevant ads and marketing campaigns. These cookies track visitors across websites and collect information to provide customized ads.
Others
Other uncategorized cookies are those that are being analyzed and have not been classified into a category as yet.
SAVE & ACCEPT